WE SHALL START our Mancunian day with morning coffee and biscuits at 10.30 am, followed by a guided tour of the VICTORIA BATHS which should take about an hour.  The tour takes place over two floors but, unfortunately there is not lift; but I have been assured that the upper floor can be viewed from the ground.  Lunch at 12.30 pm should give us an opportunity to browse in the shop.  The building is not heated, so you may want to wear a coat.

The plan to provide baths to serve the three wards of Longsight, St Luke’s and Rusholme was put to Manchester Corporation, and when they were opened in 1906 Victoria Baths on Hathersage Road were described as ‘”the most splendid municipal bathing institution in the country” and a “water palace of which every citizen of Manchester can be proud”.  The Baths served the people of central Manchester for 87 years, and established themselves in the affection of all who used them.

Not only did the building provide spacious and extensive facilities ffor swimming, bathing and leisure, it was built of the highest quality materials, with many period decorative features – stained glass, terracotta tiles and mosaic floors.  The Turkish Baths suite was one of several built by Manchester Corporation; it contained 3 hot rooms, a shampooing room, a douche (shower), a Russian bath (steam room) and a rest room.  In 1914 mixed bathing was introduced with great caution.

The baths closed on 13th March 1993 because the local council could not afford to keep them open.  Ten years later in 2003 they won £3.4 million funding from the BBC Restoration programme. 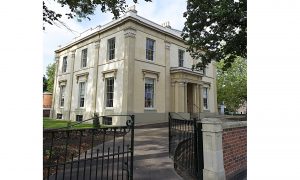 After lunch we shall make the short journey to ELIZABETH GASKELL’S HOUSE.  depending on the size of our group we may have to split into two groups:  One would take tea/coffee in the tearoom; the other would have an introductory talk.  A 50 minute guided tour will follow.  There are lifts in the building.

The novelist and biographer Elizabeth Gaskell was born in London in 1810, the daughter of a Unitarian minister.  After her mother’s early death she was brought up by her aunt in Knutsford, the town on which her novel Cranford was based.  In 1832 she married Rev. William Gaskell and they settled in industrial Manchester.  Four of their children, all girls, survived, but the death of her only son in infancy inspired her to write her first novel Mary Barton; this won the praise of Charles Dickens.  North and South appeared the following year.  Gaskell’s work brought her many friends, including Charlotte Bronte; when Charlotte died in 1855 her father, Patrick Bronte, asked Gaskell to write her biography.  She was deeply religious and some of her works dealt with the problems of Industrial Manchester.

In 1850 the family moved to 84 Plymouth Grove, a detached Regency style villa build in the 1830s, a Grade II listed building and a rare example of its type, being complete in nearly all its internal features in the main rooms, and an exterior which has been little changed.  On 5 October 2014, after a £2.5 million restoration, Elizabeth Gaskell’s house was reopened by Sarah Prince, great-great-great granddaughter of Elizabeth and William Gaskell.