wonderful views of the countryside.  From Chester we will head for Mold and then on to Ruthin and Cerrigydriudion before climbing up to Llyn Brenig at a height of 1,200 freet in the Denbigh moors.  Lly Brenig is a reservoir which manages the flow in the R. Dee regulation system, and is used to protect the water supply for NW England and NE Wales.  Contruction began in 1973 and was completed 3 years later.  With a surface area of 920 acres it is the 4th largest lake in Wales, with a perimeter of approximately 9 miles.

The coach will park at the Visitor Centre where there is a café – orders for tea/coffee (at own expense) will be taken on the coach and telephoned through, but some members may prefer to take a flask and sit outdoors.  There is a display giving informations about the surrounding area, including the archaeological artefacts which were found during constructions.  The area has been developed to provide a range of leisure activities, including walking, cycling, fishing and sailing.  A walk to the dam is recommended:  the path is mainly on the level but a bit rough in places, so suitable footwear is recommended.  The more energetic may wish to go further afield.

The light lunch of sandwiches, bara brith/scone, tea/coffee will be served in the café which overlooks the lake

Another scenic drive will take us to Gwydir Castle in the Conwy valley, a mile west of the ancient market town of Llanrwst.  The first recorded owners of Gwydir were the Coetmores who, in the 24th century, were responsible for the building of the Hall Range, the earliest surviving part of the house.  Following the Wars of the Roses the castle was rebuilt around 1490 by Meredith ap Ieaun ap Robert, the founder of the Wynn dynasty.  Additions and alterations were made in the 16th century, and in 1828, the latter to designs by Sir Charles Barry, architect of the Houses of Parliament. 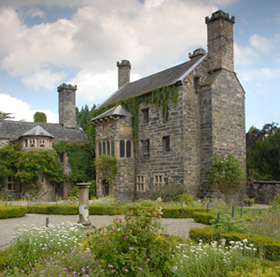 Historical figures linked to the house include Katherine Berain, a cousin of Elizabeth I, Inigo Jones and Bishop Morgan, translator of the first Welsh bible.  Charles I is said to have visited in 1645 as a guest of Sir Richard Wynn and the Duke and Duchess of York (later King George V and Queen Mary) stayed at the castle in 1889.

Peter Welford and Judy Corbett bought Gwydir Castle in 1994 and have undertaken the restoration of both house and garden.  The interiors are now furnished with their collection of early furniture, including some original pieces which have been brought back to the castle following their dispersal by sale in 1921.  In July 1998 Prince Charles opened the newly-reinstated 1640s Dining Room, the fine panelling and carving of which was recovered from the Metropolitan Museum of New York.  The story of the repatriation of this famous room is told in Judy Corbett’s book Castles in the Air, subtitled The Restoration Adventures of Two Young Optimists and a Crumbling Old Mansion.

There is so much of interest at Gwyndir and it will be brought to life on our guided tour given by one or both of the owners (please note that there is some seating available for weary members).  Tea and biscuits will be served, and there will be time to look round the gardens which are grade I listed.  They represent an important example of the formal Renaissance garden of the Tudor and Stuart periods, with later overlays and plantings from the 19th century.  The Old Dutch Garden is famous for its avenue of 22 huge yew trees, while the Knot Garden was laid out by Sir Charles Barry in 1828, when peacocks are said to have been introduced to Gwydir.